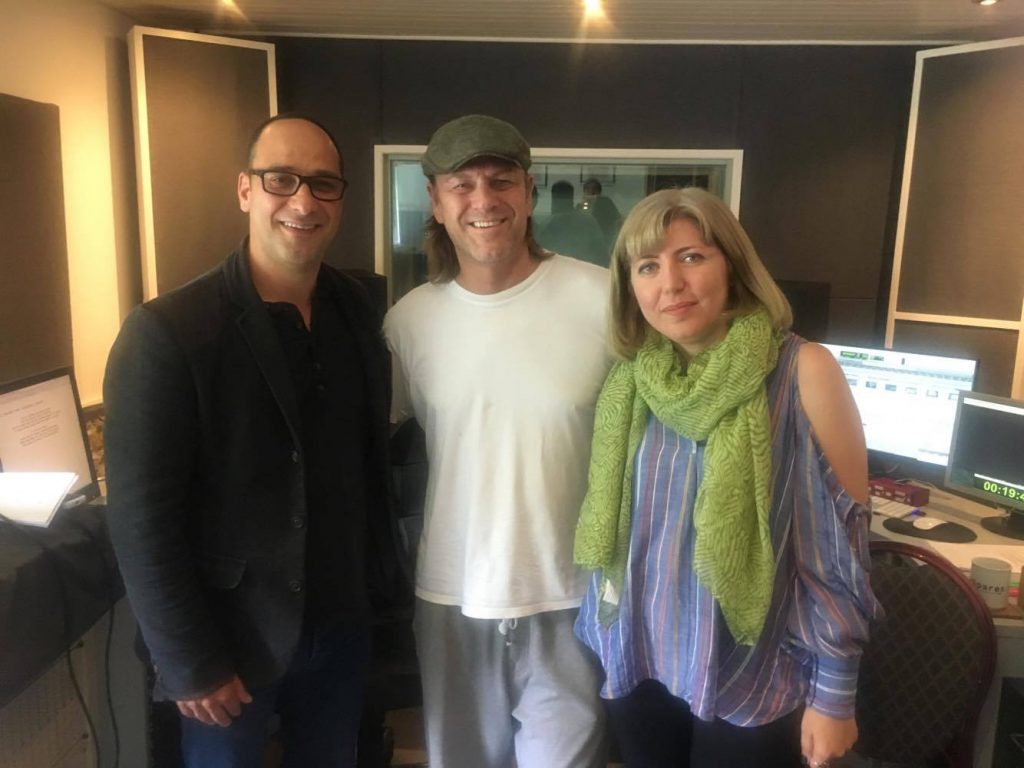 Sitting in my dad’s kitchen, drinking tea, the conversation of actor Sean Bean came up.

As a British Director, it was really important for me to have an English voice for “Taniel” but it was not just an emotional decision: in 1915 the fate of the Armenians in the Ottoman Empire was headline news here, and it’s no coincidence that the arrest of Taniel Varoujan and the other intellectuals on April 24 in Constantinople was one day before the landings at Gallipoli.

We are blessed in Britain to have so many great actors and I could not have wished for anyone more than Sean Bean to be our voice. Not only does he give Ben Hodgson’s Indelible poem, (the narrative to the film), gravitas thoughtfully delivered with his south Yorkshire accent, but he owns the page and made challenging dark verses his own, with understanding, passion and respect.

My dad’s excitement at the news of Sean’s involvement in the film was fuelled with memories of the TV series “Sharpe“, a swashbuckling character putting the world to rights. Sean’s screen presence has appealed to many and across the generations, my children, brought up on a diet of “Lord of the Rings” and “Game of Thrones“, calling him affectionately by his stage names Boromir or Ned Stark.

This is a testimony to a man whose onscreen presence not only commands the scene he performs in, but also a loved character to the generations he has performed to. Poet Taniel Varoujan’s final months are voiced and his tragic story delivered by a wonderful master of word, Sean Bean who is not just an actor but a Pop icon too.

It was an enjoyable to work with him and something we look forward to do again on future projects.

Sean Bean was already on the top of our list to read the English poetry in “Taniel” when the BBC screened Broken in 2017, a wonderful 6-part drama about Father Michael Kerrigan, a troubled Catholic priest, devoted to his parishioners.

Sean’s priest had a complex role – he preached, he prayed, he advised, he consoled, he argued – he even sang drunkenly – and I was lured by his voice as he sounded wonderful in everything. And of course, like many of his other roles you felt for him and trusted in him as he can deliver a range of genuine personal emotions in difficult and emotive scenarios.

Broken wasn’t an easy watch – it unsettled and upset me, and was thought-provoking and moving at the same time, and it made us think that he’s the ideal candidate to deal with a challenge of narrating the tragic story of Varoujan through poetry.

An actor of Sean’s calibre works, and works a lot, and getting into his diary in between his movie and commercial commitments is no mean feat.  After several months of discussions we finally got a call to say he would be back in the UK for three days, in between filming in Central America and Italy, and on a sunny Thursday morning, in a small recording studio near his West Country home, we were able to sit down with Sean and record “Taniel’s” voice.

As a producer, it’s always a privilege to work with a professional like Sean, who was kind and intelligent, taking direction and contributing greatly with his understanding of the poetry, its rhythm and emotion.

Sean brought Ben Hodgson’s poem “Indelible” to life, giving a challenging subject warmth and emotion and the film – a voice to be proud of.