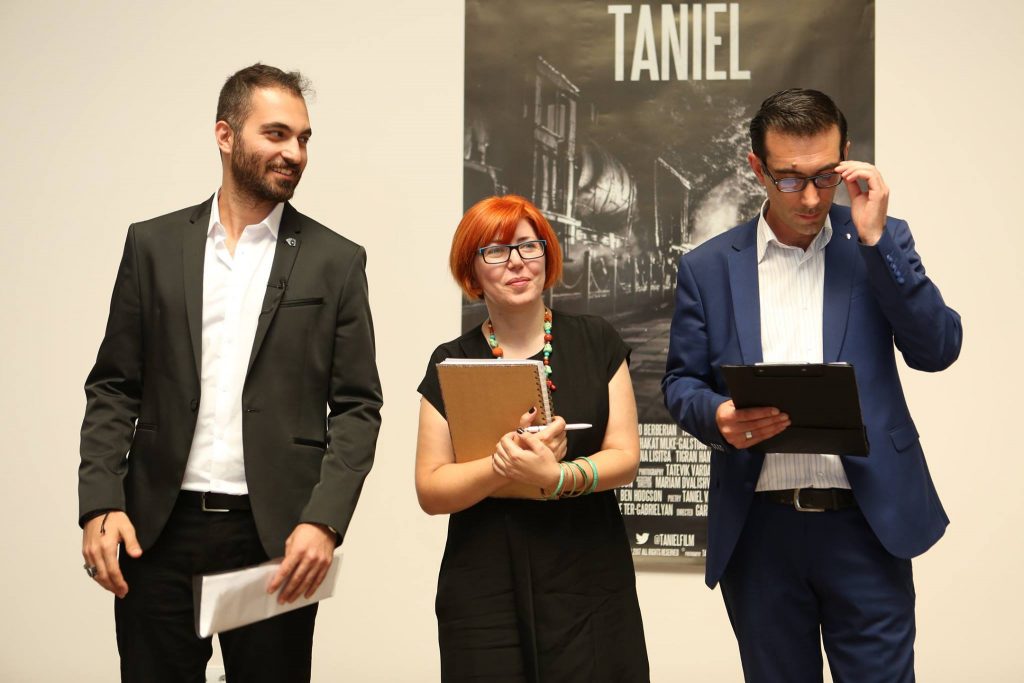 Reading Varoujan has always been a physical sensation for me – dizzying, dazzling, taking your breath away. His words, his perfect lines, his poems, condensed with emotion have always affected me since I was 12 and had to learn his ‘Ripened Field’ by heart for a school assembly. So, when I met Garo and learned about his wonderful concept of creating a film narrated in poetry, I knew I wasn’t going to stay away from it, and for more than a year I’ve had the privilege to read, re-read, analyse his works, choose poems for the film, edit and translate them, and make sure they represent his story and Garo’s vision correctly.

Varoujan is the perfect poet in a way: an elegant, beautiful man; a richly talented visionary, transcending every national and personal boundary. He died when he was just 31, but he left a huge volume of work which is alive, sounding modern and affecting people today as it did over 100 years ago, which, in a way, made our job very hard, because ‘Taniel’ is a short film.

We had 20 minutes to condense the last months from his arrest to death, narrated by his own works, and Ben Hodgson’s new English language poem – ‘Indelible’, read by Sean Bean.

It has been a fantastically enjoyable and equally hard job, because we had four books to delve into and choose poems, all of them different. For longer poems, excerpts, rather than full versions were used, but we edited them with so much love and respect, in order preserve the beauty and meaning of his lines. His range has always amazed me – he has poems which sound sweet, rhythmic, repetitive lullabies and songs which are his lion’s roar against injustice and violence. He writes about his magical pagan world of wine and dancers and kings; and writes about poverty and hunger.

We tried to do justice to his literary heritage, choosing poems which represent different sides of him. The film starts with the majestic Andastan, where he blesses the four corners of the world, and then we see his heart breaking when losing his home and family, embodying the fate of so many Armenians. He rarely writes about himself: he is a true poet, a true artist, who feels every human’s pain – and this is what was important for us to show in the film.

Our poetry selection would have been incomplete without a love poem, because his heart was so full of love and desires, and we concluded with ‘The Light’, a breathtakingly moving poem, prophesying his own future of bleeding while nailed to a cross – but still he refuses to alter his path and continues walking to the source of the light.

May he rest there in the light, a wise, beautiful, kind man, who inspired us to make this film and made us cry and laugh with words.

You shine for greatness and serving sacrifices
Rick-Veta

I’m going to the source of light…
The way is long: and that way is paved
By flintstones, and planted by myrtle thorns:
The way is steep like a ray
I’m climbing it with trembling knees,
And from knees, which were nailed by my brothers,
My warm blood flows.
I’m breathing heavily, and there is dust on my lashes.
My heart is an empty jug,
And I’m going to the source of light…