As a teenager, my love of ACDC, The Specials and Public Enemy wouldn’t normally make me aware of a composer of Michael Nyman’s musical prowess. But I was, because his name was third down on a list in a football match day program, ripped out of and stuck on my wall of “famous QPR fans”, underneath Mick Jones of The Clash and the Sex Pistol’s Glen Matlock, rock and roll company indeed.

Michael Nyman next came to my attention for the music he composed for the BBC “40 Minutes” programme, a beautiful and powerful documentary commemorating the first anniversary of the 7th December 1988 earthquake in Armenia. His score featuring the Etchmiadzin choir, was the first time I heard a respected western artist working with Armenian musicians and melodies. Nyman also generously gave proceeds of the track to the Aid Armenia charity. Gyumri was near the epicentre of the earthquake that killed more than 40,000 people. 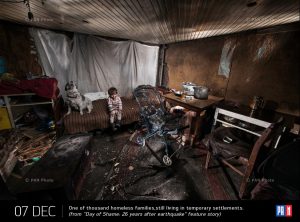 The City had a glorious past, being Tsar Alexander’s favourite city, with some of Armenia’s best neoclassical architecture, theatre and culture.

I visited the city in 2015 to find locations for “Taniel” and was shocked at the level of destruction still visible, how thousands of people are still shamefully living in desperate conditions in temporary shelter nearly thirty years after the event was an eye opener about the lack of compassion and corruption in this ex-Soviet nation.

When thinking of music for “Taniel”, Nyman’s “Out of the Ruins” score seemed so fitting. The track beautifully builds and develops the feeling of exultation and ultimately resurrection, a theme that worked so well for my last scene. Varoujan as a poet and Gyumri as a city of culture, whose past glories are now just memories suffocated by horrible events in history, deserve better. I hope if attention can be raised through “Taniel” for the continuing struggle of the people of Gyumri then that will be one positive thing.

Nyman’s extensive film work includes “The Piano”  “Man on Wire” and “The Draughtsman’s Contract” as well as many theatre and opera productions.

It is wonderful to have a score by one of Britain’s best composers fit so well with the vision of “Taniel” and also we should celebrate an artist who has contributed to Armenia and its people when they needed it most.