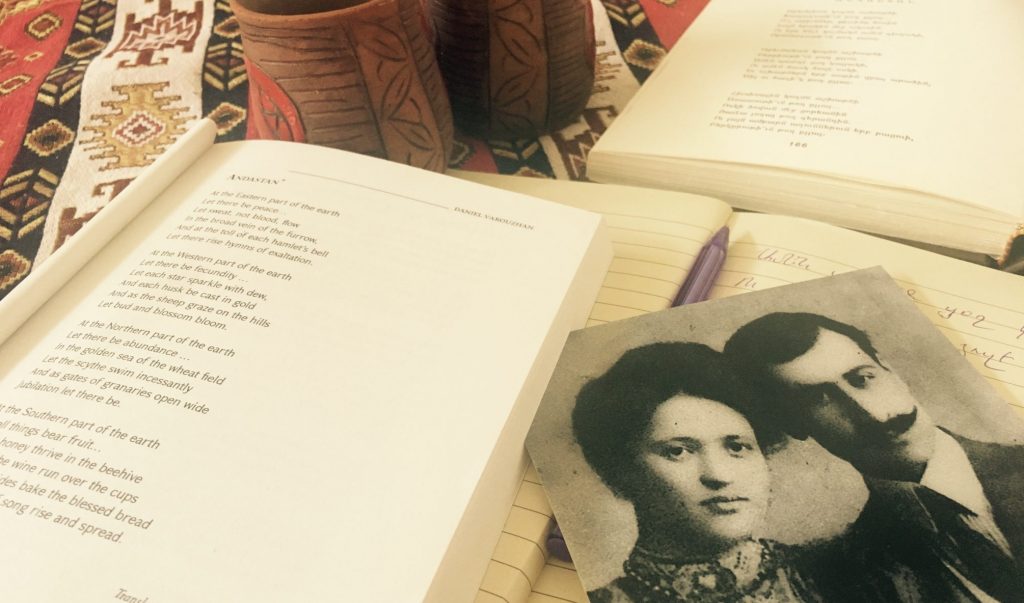 I was given a book by a friend – it was by Aram Andonian’s book entitled “Exile, Trauma and Death”, and it was an absolutely fascinating read, describing the story of the Armenian intellectuals who were arrested on April 24th 1915 and their journey to prison.

I had always been keen to address the issue of the Armenian Genocide, but I didn’t want to go down the traditional documentary route. I felt for a long time that the suffering of Armenians, something my grandparents experienced first-hand, an imprint that never left them, should be expressed in celebrating the human spirit, the textural fabric of the individual that often has been lost in facts and stats and arguments about what word you should call the murder of a race – as though somehow that changes anything.

In the book, Varoujan is fleetingly mentioned, but what was written, captivated me about the man. I followed up by scouring online for scarce English translations of his works, a dozen or so poems that had made the journey from Armenian to French and then to English. I worried about clumsy translations and Chinese whispers, had the meaning been changed, but even so what I read was majestic. His understanding of humanity and its fragility and our connection to the earth, the land we live on and her spirit that is ever-present in the mountains, rivers and valleys, was magical.

With the help of our poetry producer Tatevik Ayvazyan, we embarked on a journey of research and discovery, constantly grateful to the preservation and survival of the many original publications and the wonderful translations by dedicated lovers of literature like Tatul Sonentz-Papazian and Alice Stone-Blackwell.

I really wanted Varoujan’s words to be heard in Western Armenian and with the help of our consultant, Istanbul’s very own Armen Saruhanyan, our chosen passages were delivered with emotional depth by Yegya Agkun, complimenting the marvellous onscreen performances of Tigran Gaboyan.

Throughout the process, whether it be during the filming in the ruins of Gyumri or poetry rehearsals sitting on a balcony looking across the sea of Marmara, we were absorbed by the beauty of Varoujan’s writing, his prophetic vision and expressionist thinking.

Varoujan was a fabulously talented man, who at the tender age of 31 was murdered for no other reason than being an Armenian, his young age belies his great talent and vision that still stands strong today.

Garo in his own words