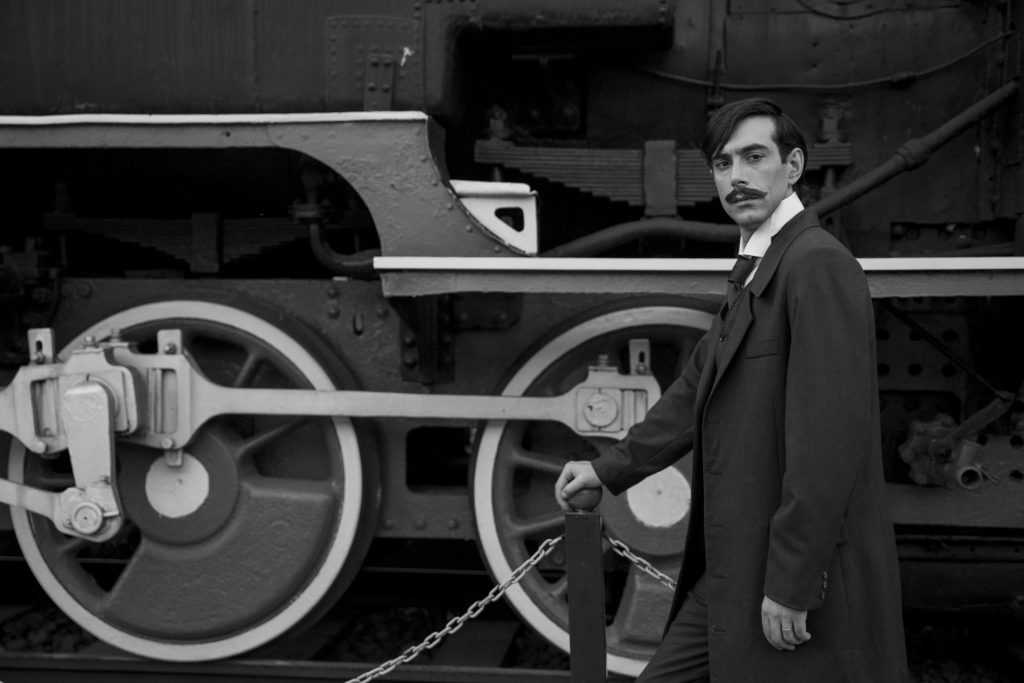 We talk to Tigran on Skype, from his home in Gyumri. You can immediately feel that you’re talking to an actor, he’s comfortable on camera, and extremely articulate.  He’s a gentle, handsome man, with a smile always ready to brighten his face. He laughs when Garo calls him Tigran the Great, as a reference to the ancient Armenian king Tigran Mets.

We start with the usual question, ‘who is Tigran Gaboyan’, asking him to introduce and present himself for the blog. Tigran thinks that might sound immodest, and gives us a few bare facts. He’s been acting since he was 15, studied Drama at university, and has been an actor for 22 years. Then his says something really interesting: Taniel is his first movie role, as he’s exclusively been a theatre actor. He also very reluctantly tells us that he’s the youngest recipient of the Honoured Artist award in Armenia.

‘Playing Varoujan has been my baptism in the film world. And I was lucky to get baptised in a great group of creative people’. Acting in a film has its own difficulties, he thinks, as there is too much focus on the actor’s skill at any moment. He tells us that he’s played more than 100 roles in theatre, ranging from the main protagonists to smaller supporting parts, from Armenian playwrights to Shakespeare. ‘But it was a hard job to play Varoujan, a person who embodied a whole nation’, he adds. 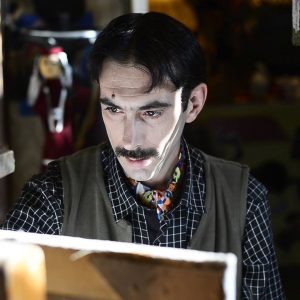 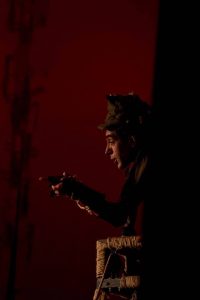 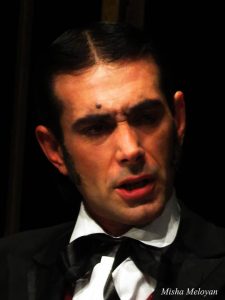 Tigran gets very passionate when talking about the Varoujan. ‘He was a world citizen – after studying in Europe, being influenced by Flemish art, he came back to Brgnik, his simple village and he took the villagers –farmhands, labourers, women baking bread – and turned them into subjects of universal art. This is an approach of an artist with a big mind, big heart, able to fly high. He wrote about Armenians for the Armenian nation, but turned them into a part of humanity transcending any national boundaries. His classmates from Gent always said that he belongs to the world and to Europe as much as to Armenia’.

‘This is why it was a huge responsibility to play him, because I was not only playing a character, but also someone representing the nation, but at the same time is above and beyond all the national narrow constraints.

He thinks it was a hard job to present all the intensity of condensed emotions of Varoujan, especially because the poet was a deep, sophisticated character who endured great turmoil in his last days, and thus it was important to be subtle and understated.

We talk about the immense challenge that his role as Taniel Varoujan was silent, both in terms of the films dialogue scenes and where we hear the poetry. Garo wanted Taniel Varoujan’s character to be portrayed from within, with dignity and strength and for the viewer to be connected directly to his thoughts.  ‘His acting was fantastic’ says Garo about Tigran, ‘its one of the most difficult things to ask an actor to express themselves with essentially one hand tied behind their back, but Tigran really understood Varoujan and who he was, and I was so pleased with his performance”. 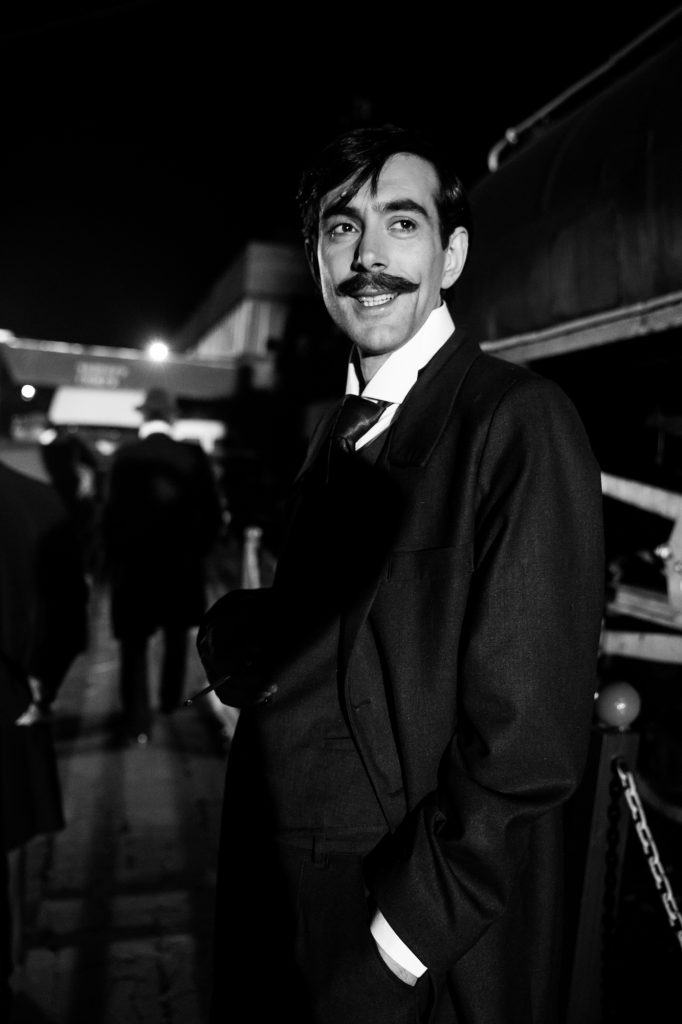 We ask Tigran how he prepared for that role. ‘When I read the script’ and saw that it was a silent role, I realised I was constrained to expressions and I needed to be able to fully connect to the characters range of emotions. I started thinking about not only being alike Varoujan in physical aspects but also reflecting his internal world accurately. This wasn’t a job for a mime artist, expressing things thought body motions – I had to become Varoujan, feel like Varoujan’.

It’s moving to see how much Tigran cares about his character, and how much effort he’s made to feel like him and portray him accurately, without speaking. ‘Sometimes silence speaks better than long speeches’, he says. ‘But you have live that silence, feel that silence, and express everything through a look in your eyes. You should be able to present a whole biography of a nation’, he concludes.

Garo describes one of the scenes: after Taniel’s arrest, he’s on the train, watching the landscape and Armenian nation through the gap in the wagon door, city folk and villagers alike continuing with their daily lives, unawares of the calamity that was to befall them – and Tigran’s expression needed to reflect that complex emotional state he was in, captive and also powerless to help anyone else.

When reflecting back on the difficult job in casting a lead actor for “Taniel”, Garo remembers that he immediately noticed Tigran because of his height and likeness to Varoujan, and when they started talking, he realised how well he knows and feels Varoujan’s poetry, and this was an important ingredient for our protagonist. We ask Tigran what’s his favourite thing about Varoujan’s poetry. He says he started like everyone else in Armenia – learning a few of famous poems at school, like Ode, but his literature professor at university, ‘a fabulous man called Haikaz Hakobjanyan’, who wrote a book on Varoujan himself, introduced Tigran to the poet fully.

‘He was writing out of all the conventional boundaries of traditional Armenian poetry’, Tigran says, “The Song of the Bread” (Հացին երգը) is one of the most glorious works of him, one my favourite collections of poems of him, and I love “The Concubine” (Հարճը)’.

Then he starts talking about “Andastan” (Անդաստան) (NB – one of Varoujan’s most famous poems, published after his death, which is also used in the film) and this articulate, talkative person is suddenly lost for words as he’s so overcome by emotion. ‘What sort of person do you have to be to write it’, he finally says ‘putting aside the religious aspect of the poem, and what sort of incredible person do you have to be to bless every corner of the world and wish peace and kindness to everyone everywhere. How did he, a mortal, raise himself to that divine level?’

It was Varoujan’s humanity, he concludes, that raised him to that level, allowed him to transcend every national and personal boundary and write as someone who’s not constrained by anything, but can just bless the world.

Our conversation with Tigran moves on to other topics, but it is wonderful to realise how deep and personal is his understanding of the character he plays and how true he is, in his portrayal of the great poet.

Tigran in his own words

Favorite color: grey
Favorite composer: Bach (classical), Tigran Hamasyan (modern)
Favorite director: Milosh Forman, Sergei Parajanov
Favorite movie: “One Flew Over the Cuckoo’s Nest” and “The Colour of Pomegranates”
Favorite actor: Jack Nicolson, Anthony Hopkins
Favorite artist: Ivan Aivazovsky and Arshile Gorky
Who I’d like to work with: I would like to work with the filmmaker who will be able to explore new layers of human psychology through their work
Favorite moments in Taniel: the scenes in the prison and the moment when Taniel is dying and his son is born.