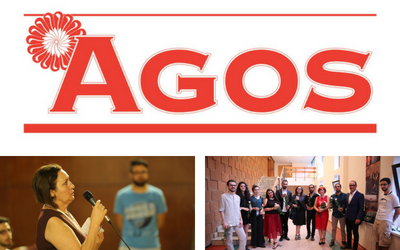 AGOS journalist Dzovinar Lokmagyozyan attended the Taniel screening for the Golden Apricot’s International Film Festival’s Armenian Panorama section at the Cinematographers Union. Read her review below, and click here for the Armenian version.

“At the Eastern part of the earth
Let there be peace…
Let sweat, not blood, flow
In the broad vein of the furrow,
And at the toll of each hamlet’s bell
Let there rise hymns of exaltation”.

A policeman aggressively bangs on the door…  lines of text get covered in blood.

It is easy to kill the poet, but not the lines of his poems.

This 22-minute short film, ‘Taniel’ was made by director Garo Berberian (producers: Tatevik Ayvazyan, Nare Ter-Gabrielyan). The director was born in Great Britain, where his parents immigrated to from Cyprus.

“Taniel” is a film about Taniel Varoujan, it is beautiful and enchanting, with the poet’s Armenian voice delivered by Istanbul’s State Dramatic Theatre actor Yegya Akgun; and the films voice in English delivered by Hollywood Actor Sean Bean.

The song ‘Ay Aylukhs’ is weaved into the poetry, the Western Armenian language caressing our Eastern Armenian ears. The cinema hall watched the film breathlessly. Exquisite. It seemed like it wasn’t created by a human, but was just created by itself. The film ends to the adulation of the song ‘Habrban’

Gyumri was the films location, the city is also home to most of the large talented cast, who ply their trade at the Gyumri Dramatic Theatre. There were also actors from the Mihr theatre group.

What terrible deaths our intellectuals had to endure in 1915? Do we know enough about it? We know that at least Taniel fought back, and as a result, he was killed in a particularly cruel way. The thing about the Armenian Genocide is that while every one of the 1.5 million victims had their own deaths, we also remember our intellectuals’ spiritual legacy more, than how they met their horrible deaths.