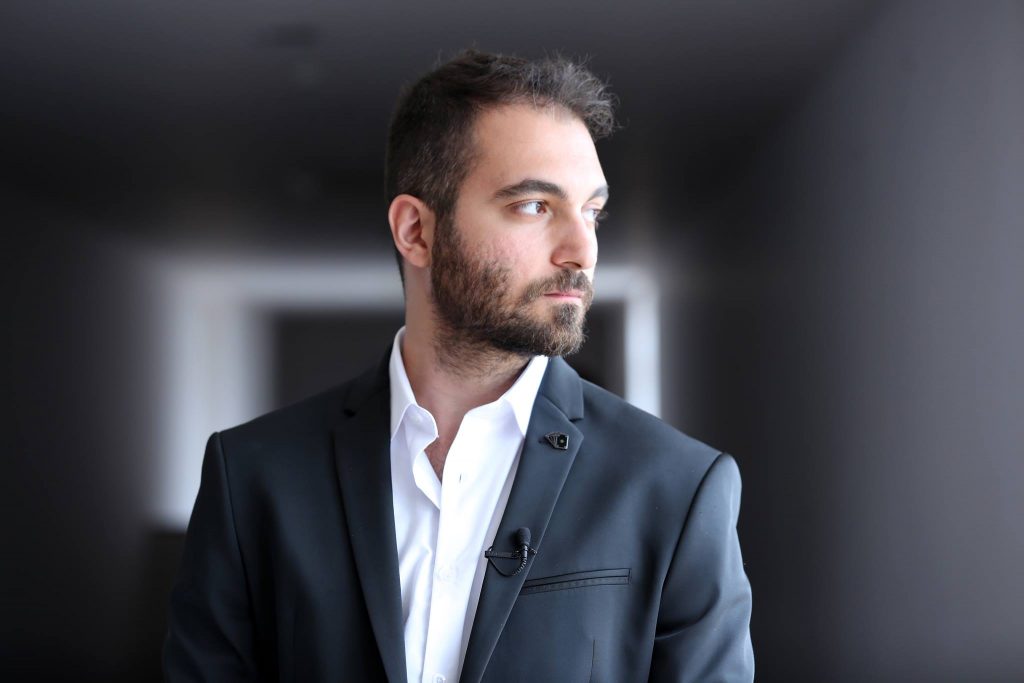 This is the English translation of the article which was originally published in Turkish in Istanbul in Paros. Interviewer: Sarkis Güreh

Yegya Akgun is a young actor living in İstanbul, his first film role is playing the voice of poet Taniel Varoujan in a short film called “Taniel” which was screened at the 15th Golden Apricot Film Festival Armenia and the film was approved by critics and viewers alike. Akgun’s theatrical passion started on the stage of Armenian Associations in Istanbul as he studied to be an actor, and performing in “Coriolanus” for the Turkish State Theatre.

Would you tell us more about yourself?

I was born in Samatya in 1989 and completed my primary and high school education at Sahakian college where I had my first acting experience and this adventure played a big role in my future career. I completed my undergraduate education in sociology and after graduating from university I decided to further my education in theatre where I qualified in advanced acting in Bahçeşehir University. Nışan Şirinyan, Kevork Türker, Dikran Peştemalcıgil, all of these men helped me prepping for the advanced acting exam and their experience was valuable for me and my first productions “Blood Wedding” by Federico Garcia Lorca, “The Bear” and “ Marriage Proposal” – Antov Chekhov and then “Coriolanus” by Shakespeare.

What can you tell us about “Taniel” film?

“Taniel” is a short arthouse film directed by Garo Berberian, the production took place in the old Armenian city of Gyumri. The film deals with the story of the great poet Taniel Varoujan and the Armenian intellectual who were dragged into the dark journey of 24 April 1915. Varoujan was prophetic in his poems and he always yearned for peace and serenity, in Andastan, the opening poem in the film, Varoujan talks of blessing the world, but Varoujan’s fame was not enough to prevent the destruction of his world. Actually, this film clearly underlines differences between good and bad, dark and light.

How did you take part in this film?

I received a call from a good friend Lara Narin who asked me “Do you know an actor who can speak Western Armenian?” and she gave me an e-mail address. I sent an email to the director and we started to speak on Skype. After some screentests, they decided that I could be the voice for “Taniel”.

Would you give some details about preparation process of your role?

Tatevik Ayvazyan, the poetry producer was a massive support in my preparation for the role, she has deep knowledge about Taniel Varoujan and our mutual work in preparing for the role helped in my perception of Taniel’s art. Verses of his poems and the mastery in the use of words that transport you to a faraway land of dreams. Mr Armen Saruhanyan also used his experience in helping me fully appreciate the Western Armenian language. Taniel wanted to take away the pain of Armenian people and help them find peace, for instance, in the poem “Groong” (‘The Old Crane’), he likened the Armenian people to a tired crane. His aim was that he wanted to carry all sufferings and sorrows on his back for distributing peace to our people. In “Andastan”, he consecrated the world and he also wanted to fill the world with abundance. He said that “Sweat should flow instead of blood” as he had predicted the dark days to come.

Taking part in this project what did it contribute your life?

First of all, I was a part of a wonderful team. I got the opportunity to work with nice people who love and respect their jobs and I’m sure we will find opportunities to work together on new projects in the future. This project enabled me to become more familiar with the art of Taniel Varoujan, the hidden treasures among the verses of his poem, his ability to foresee the mastery of transforming words, the deep passion of his wife Araxsi and the blessing of birth instead of death. It was also a good experience for me to go and perform Varoujans poems on the stage in Yerevan and Gyumri after the film screenings.

First of all, he was a poet in love, you can easily see the depth of his love when you examine the poems devoted to his wife which are so passionate. His writing style is soft, when you read his poems you can feel his imagination walking in open-air meadows. He carried  the pain of the Armenian society on his shoulders without expectations. The day of Taniel’s death, his son was born. It can be said that death has been defeated in the face of life.

“Taniel” was first shown at the Bermuda International Film Festival and we returned with two awards. At the Golden Apricot Film Festival and at the special screenings in Gyumri and the Genocide Museum-Institute the applause of audience at the end of the film was exciting., emotional with a mix of hope and sadness. After the screening, the audience’s questions are proof that people understood the deeper points to which we wanted to raise. In addition, I feel lucky to be a part of this project.

How can people watch the film?

Our director will attempt to bring “Taniel” to the land where he is born, to Istanbul, and hopefully it can be shown in Istanbul.

What do you think of your future career after that?

There are two theatre plays, I would like to put on in Istanbul. The first one is Vahram Papazyan who gave life to Shakespeare’s drama for the first time and other one is the life of Gomidas Vartabed. I completed the writing of both theatre plays, but there are a few minor dark spots related to Vahram Papazyan so I will go to Armenia again in September and enact it on the stage after I find the necessary information. 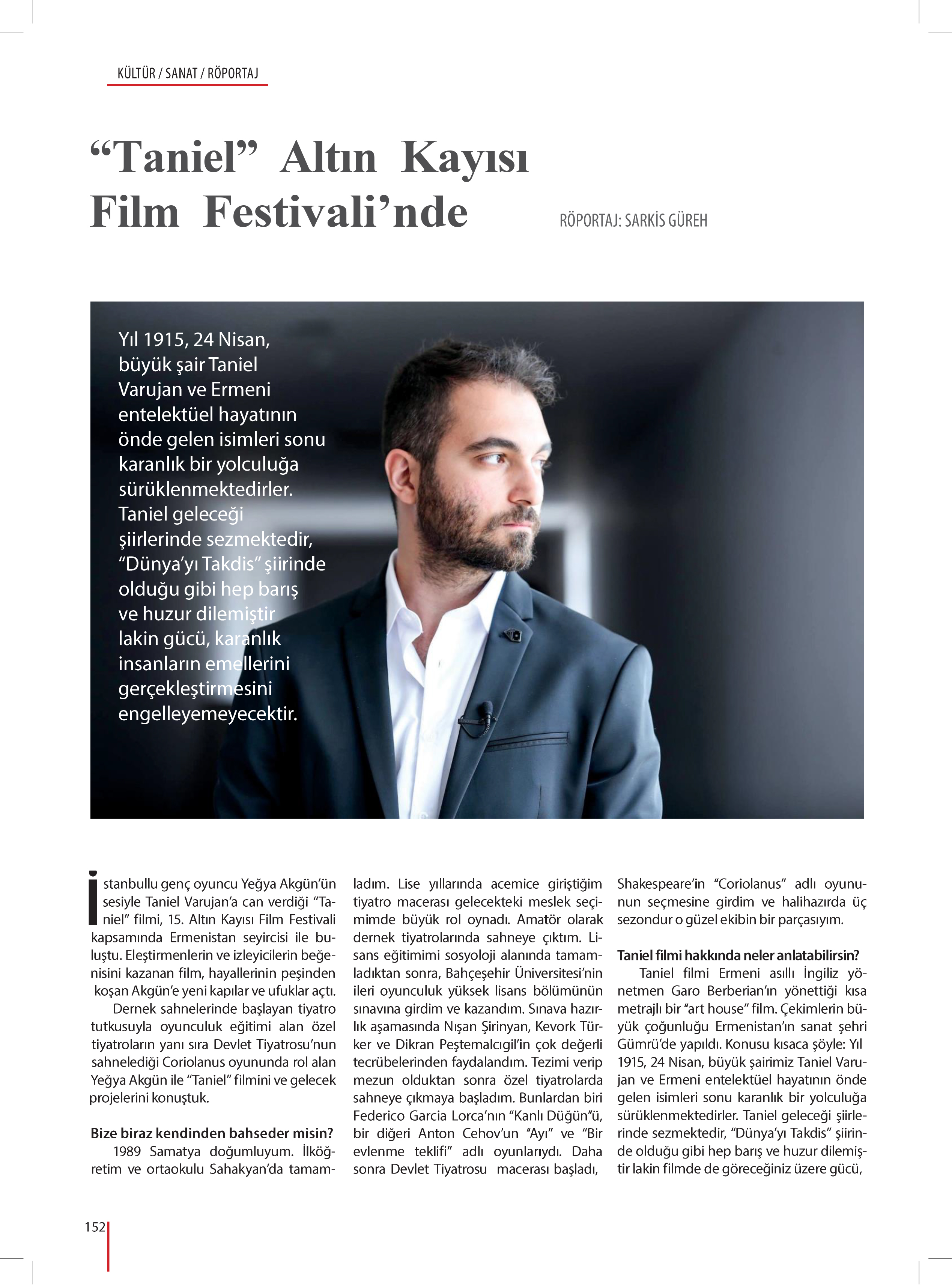 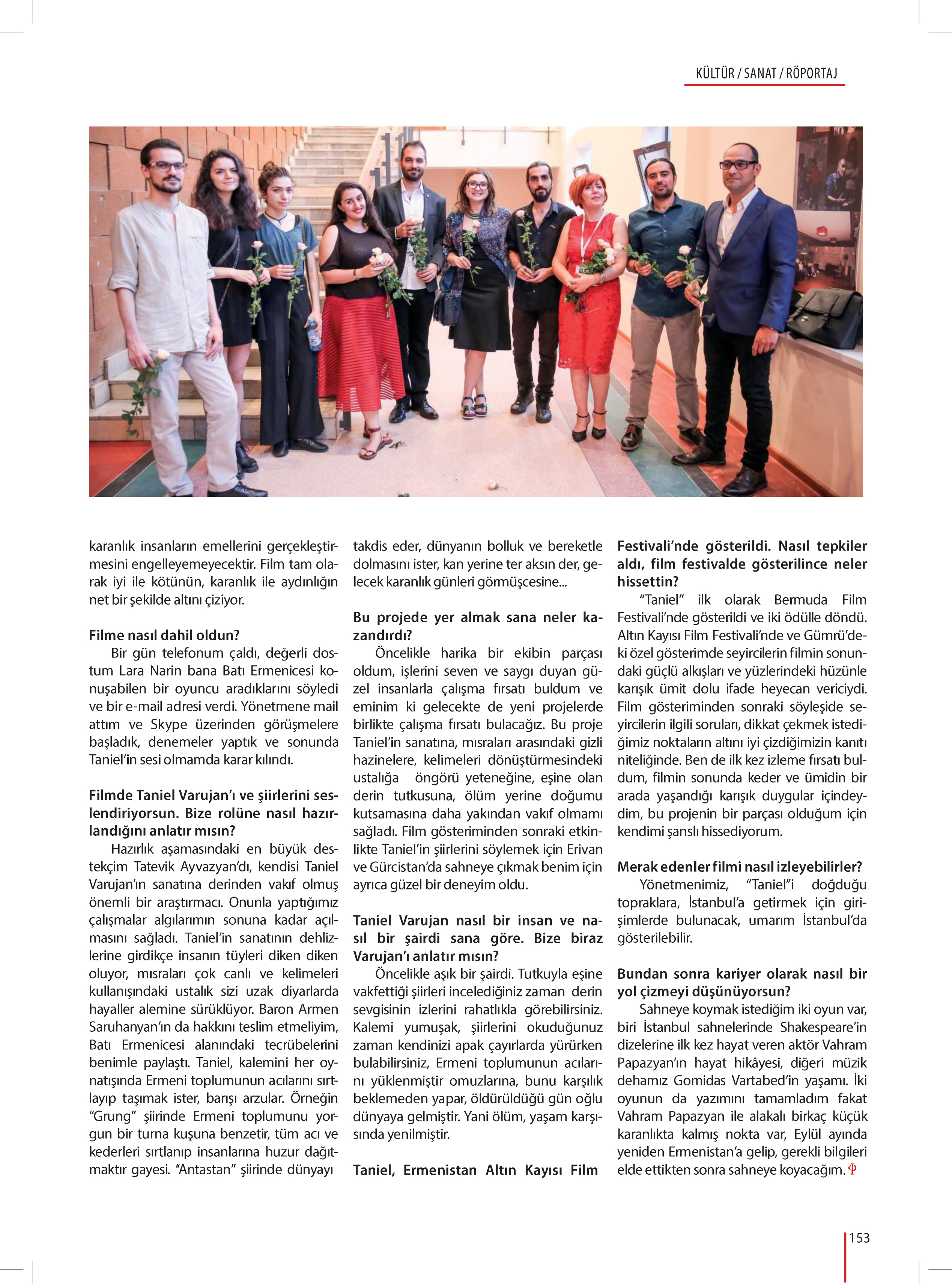