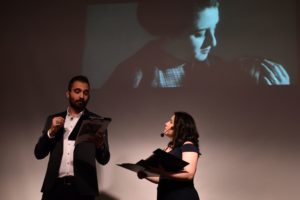 Moscow-based ZHAM magazine has been following Taniel since we met at our screening at the Armenian Genocide Museum-Institute last year.

We talked to the editor Anna Givargizyan, (an author of a monograph about Varoujan herself) about our last two screenings in Istanbul’s Hrant Dink Foundation and Ghent University and here is an extract from their article.

You can read the whole text here.

It’s important to note that the film was subtitled in Turkish specifically for the Istanbul screening, because the filmmakers wanted the story to be accessible to the Turks and other non-Armenian speakers. Before 1915 Taniel Varoujan was enriching the Ottoman culture as well, he was not merely an Armenian national poet, but someone of international stature and understanding of humanity. One of the results of the Genocide and Turkish nationalism is also the destruction of Armenian culture and cultural icons. Director Garo Berberian says that it’s painful that one cannot find a plaque on the house where he lived, or a statue in his home village of Perkenik, or poetry books in the Istanbul Library. After his murder in custody the traces of his existence have been erased from modern Turkish history, this is not just a loss for Armenians but modern Turks.

Taniel’s team was still busy the next day after screening, as it was Varoujan’s 135th anniversary, and they organised and filmed a poetry reading near his last home, which he left never to return. Yegya sounded particularly poignant and emotional, reading ‘’To the Muse’’, about the dark prophecy about poet’s fate. It must have been a wonderful feeling to bring his words alive in the place he would have walked every day.